32 Years of Service in the Culinary Industry

I am Ethan Wong, Ah Keong (阿强) aka Chef Keong’s son, youngest to be specific, I have always wonder how did all these started, his life career, his legacy. Therefore, this post was dedicated to his lifework – History of Keong Kee Restaurant (强记面食), famously known as 强记大树头 or 强记生虾面 (Keong Kee Sang Har Mee)

CLARIFICATION: This article was meant to briefly introduce and clarify his culinary journey in the restaurant line with the important events that had occurred through his service in the industry. This article was written based on the Chef’s true-life event, with permission given to his youngest son, Ethan Wong (to some, I am known as Ah Hoe) to edit, codified, compose, compile, publish and use all the photo(s) and material(s) related to this article.

One evening during a regular day, I asked my father if he still remembers the opening date of his first stall back in the 1980s. Immediately, he replied, 1982. Of what day and month?, I asked. 1982 August 6th, he answered. This clearly indicated that his career was all his blood and sweats. Did you took any pictures during your opening day?, again I asked. Swiftly he stood up and walk towards the drawer where we kept our old photos. “Not sure if they are still here son”, he said, as he took out those photo albums. Upon browsing a few of them, he recognized some of them and mumbled, “should be in here”. He then slowed down and carefully browse through the album. A few moments later, he extracted a few photos from the album and showed them to me, “there you go”. Full of excitement, he explains those photos with a smile on his face.

It was evening, around 5 pm during his very first business day that his family members and friends came to show their support. Flower bouquets were sent to his stall located at the narrow Lorong Yap Ah Loy. Venturing into his own food business was never easy. He had to push his stove from the inner part of Lorong Yap Ah Loy to the front of the streets on a daily basis. However, he had his loving wife, who is also my mother who works together with him, supported him from the very beginning of his venture. During rainy days, he told me that he started off all wet from head to toe and dried off his clothing from the heat of the stove as he cooks his evening off. The beginning of his career was never easy.

Despite all these obstacles, he manages to maintain his spirit for all the 32 years of service in the culinary field. What is the thing that drives him to do that? He told me, once there was someone who said to him something discouraging on his very first business day at his small humble stall. “You don’t even know how to hold the Chinese spatula and ladle properly yet, you will have your stall close in no time!”. And my father said, “It is because of what I heard back then, I tell myself, I will make it happen and I will show them that I can!” and so he embarked on his culinary journey.

They started off with a very simple menu – noodles only. Choices of freshwater prawn, beef, or pork with crispy rice vermicelli, pan-fried flat rice noodle, or crispy egg noodle topped off with thick Cantonese egg gravy.

During this period of time was when he refined his skills and cooking techniques. Many customers gave him suggestions on flavor, texture, taste, and presentation. Thanks to their advice and comments that he improves his cooking skills to the best he could. 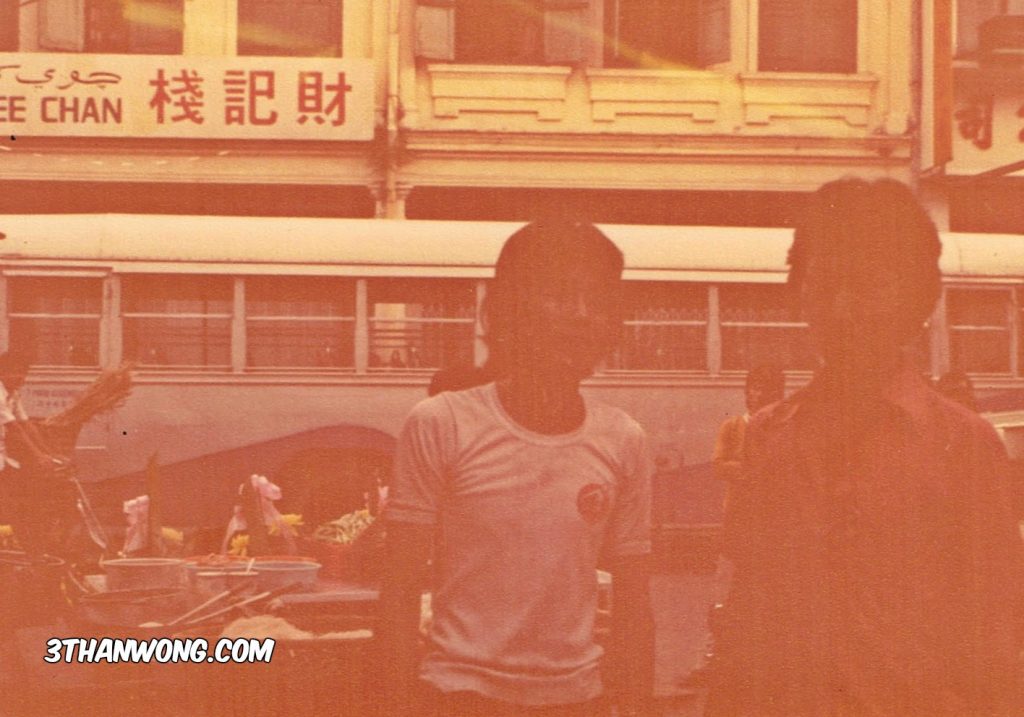 For 5 consecutive years, he and his wife struggled through rain and shine with his small humble stall before saving enough to move to a shop lot at Changkat Bukit Bintang in 1987, November. He gave his stall to his younger brother who ventures off his own journey to Kow Siew Restaurant. My father told me, during that time when they were moving to this location, my mother did not even realize she was pregnant with me. 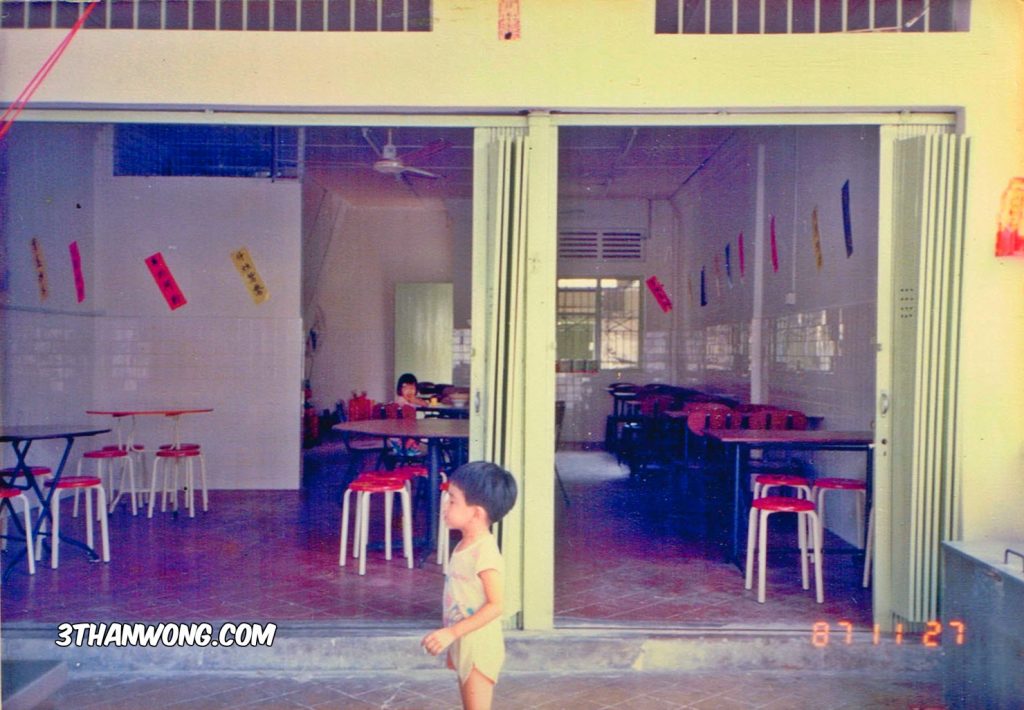 At the end of 1988, he introduced a new menu list. Serving rice, variety of meats with different cooking styles while still maintaining his best seller Cantonese noodle on the menu list. The business was doing very well and packed on every business day. There was a total of 9 in the team to operate the business. However, due to it is always busy and packed every single business day, staff started to leave the team, complaining that the other restaurants do have some relaxing day and month but not yours. At the end of 1989, from a team of 9 down to just him and his wife, leaving them with no option but to return to their original menu – Cantonese noodle.

In 1990, the landlord sold the shop for RM250,000. With the new landlord wanted to refurbish the shop into a travel agency, they had to relocate again. They moved a few blocks away to a corner lot on the opposite row under a huge mango tree by the roadside. 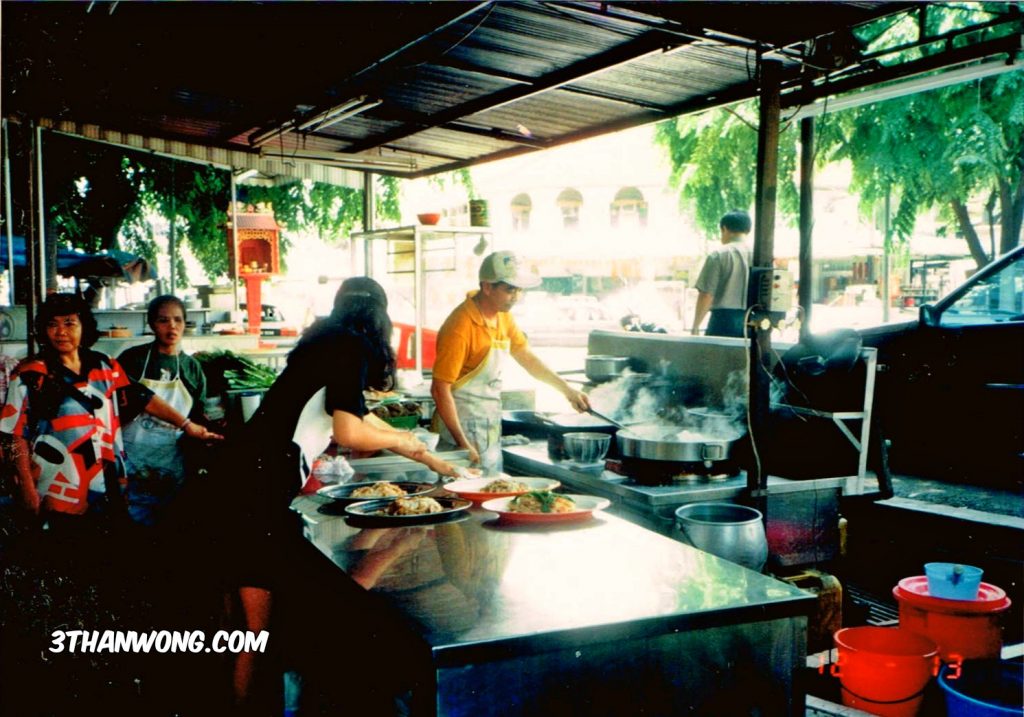 This period of Keong Kee Restaurant is where I remembered more of the details. Every day was busy as usual, with them started preparing the ingredients in the morning as early as 8.00 am. There were three stoves, the middle one was meant to prepare gravy and the one on the right is the hot water. These two were powered by kerosene and the stove on the left was heated with charcoal. Every now and then, my father has to rush to the kerosene tank and give it a few pumps then back to his stove to resume cooking. Meanwhile, he had to lift the left wok up to a corner and refill with charcoal from time to time.

The funny thing was some time, he would be late to prepare the charcoal stove prior to his opening hours, my mother would have to inform the customer that the charcoal stove is not yet ready to be used. Those were the days with all the antique kitchen setup.

I still remember clearly that I was here playing hide and seek with my siblings, hiding in the storeroom. Sometimes we were too playful and naughty, giving troubles to Chef Keong and his wife that we got punished. Once we got tired of playing around, we would simply crawl into the compartment of the stainless steel working table and snooze off right in front of the customers.

Fast forward to 1998, we moved to Taman Tun Dr. Ismail (TTDI) at Jalan Tun Mohd Faud. I remember clearly that the back of our shop faced the Pasar Besar TTDI. 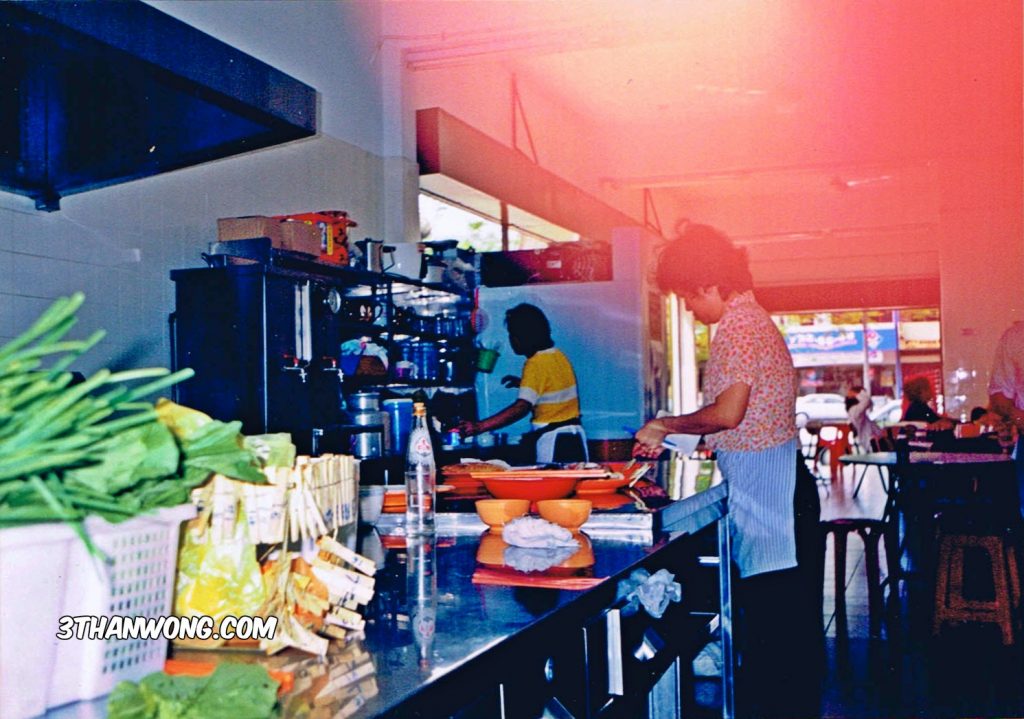 Business there was exceptionally well, the crowd starts at 11.00 am whereas our opening hour is 11.30 am. It was crowded throughout the entire lunch hours which end at 2.30 pm. For a short 3 hour period, Chef Keong alone manages to pull off a whopping 250 – 300 plates of Cantonese noodle.

As my brother graduate from high school in 2000, he went forth to assist in my father’s business as he shows interest in the culinary industry.

In 2001, Chef Keong decide to moved back to Kuala Lumpur at an end lot next to an alley at Jalan Barat off Jalan Imbi due to rental increment.

Old fashioned folks they are, they did not make an announcement about their relocation. Business went from the top to the bottom. It took some time before the news spread and his regular customers flocks his restaurant “complaining” that they dearly miss his food.

It was here when Chef Keong added a few more dishes to his menu. Garlic stir fry vegetables of the day, steamed chicken, and steamed freshwater fish. 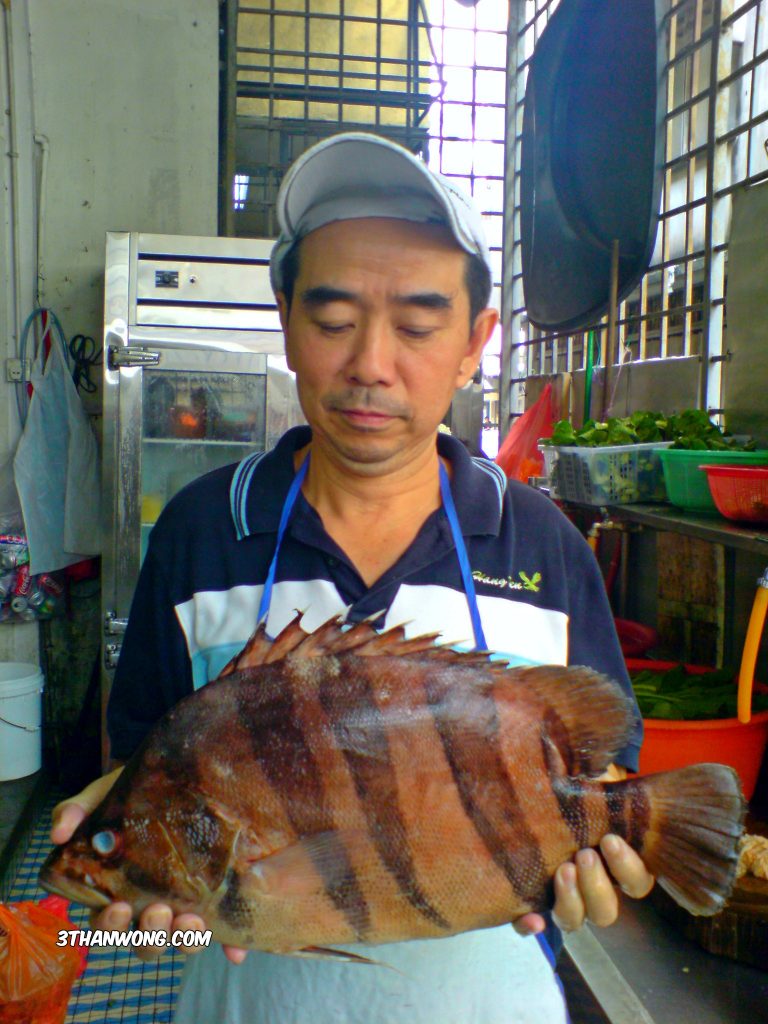 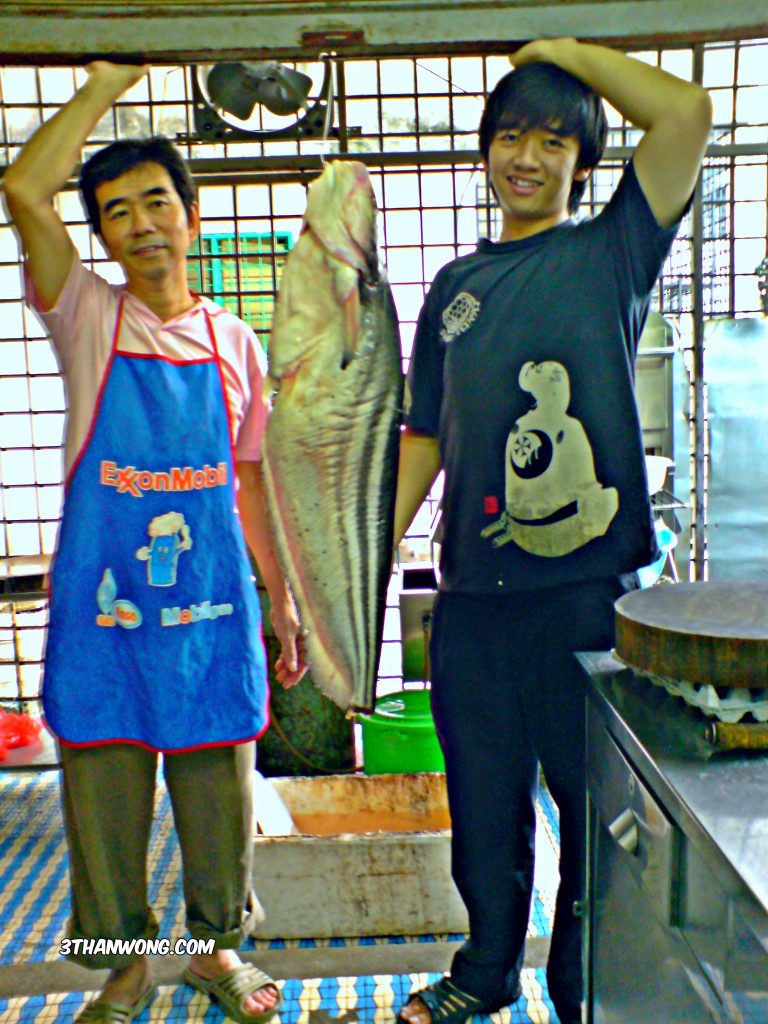 Me and my father, Chef Keong taking a picture together with a Tapah Fish (This is the type of catfish that eats monkey by the river when monkey are caught off guards drinking water)

In January 2006, I enrolled in a Diploma in Culinary Arts (Académie de Toulouse, France) at Taylor’s College. However, at the end of 2006, my mother was diagnosed with breast cancer that I have to quit my studies and step forward to assist the business.

With me getting a hang of the daily operations, my brother decided to venture off to other local Chinese restaurants to further develop his culinary techniques and skills in early 2007.

Chef Keong has always explored and self-taught the Chinese culinary techniques, mostly from watching television cooking shows though. However with his years of experience in the kitchen that he almost instantly mastered them. 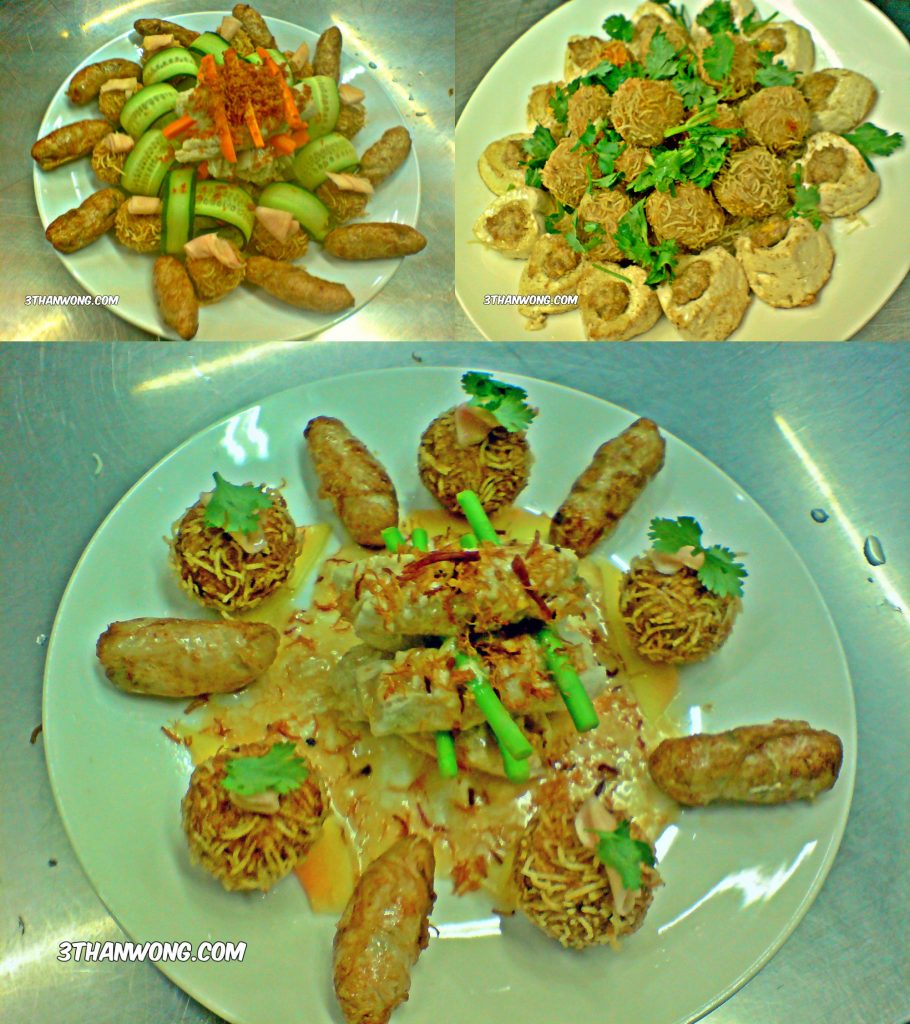 Some of his combinations – the picture was poorly taken due to the smartphone era has just begun. I remember this was taken with Sony Ericsson K800i 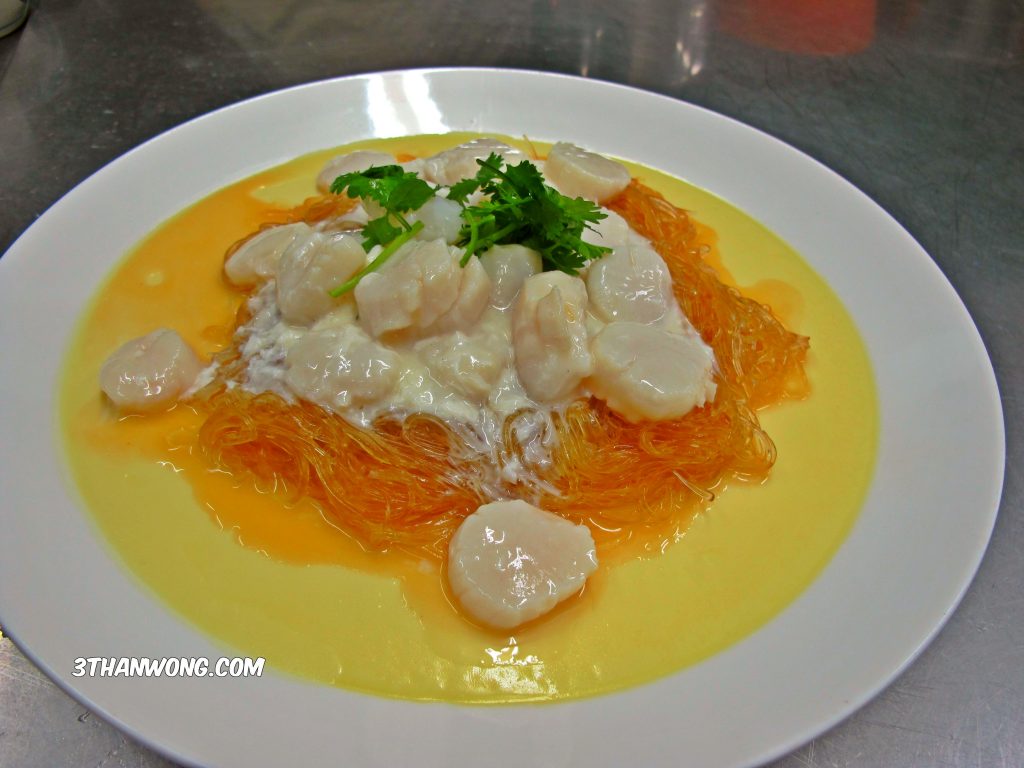 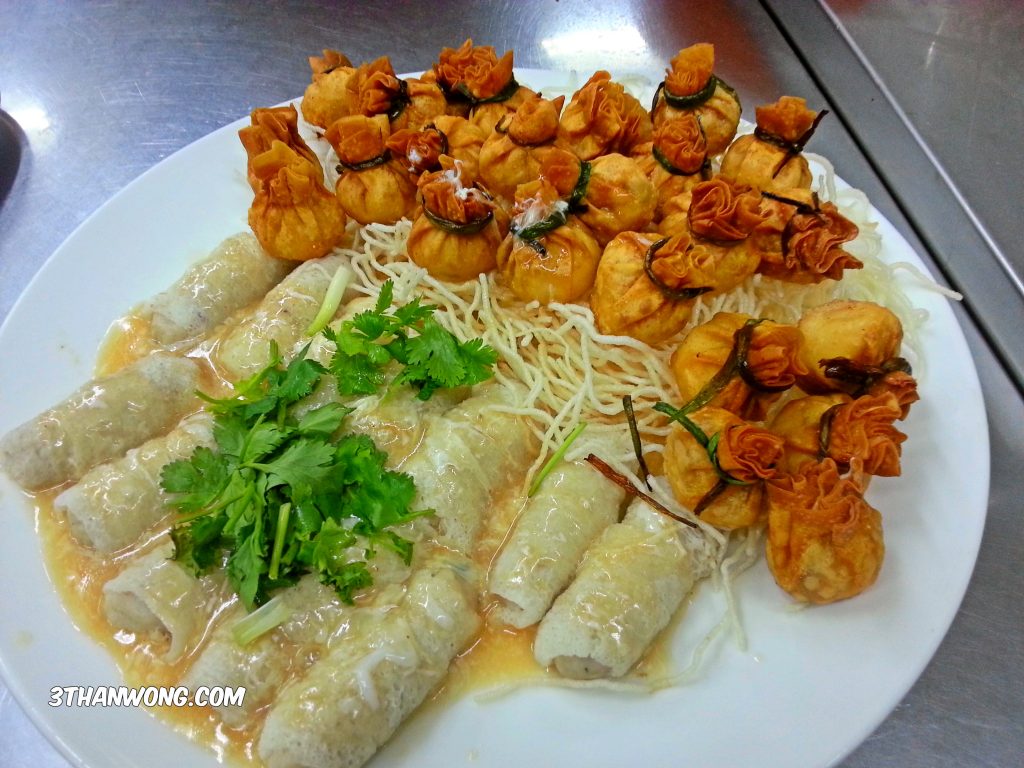 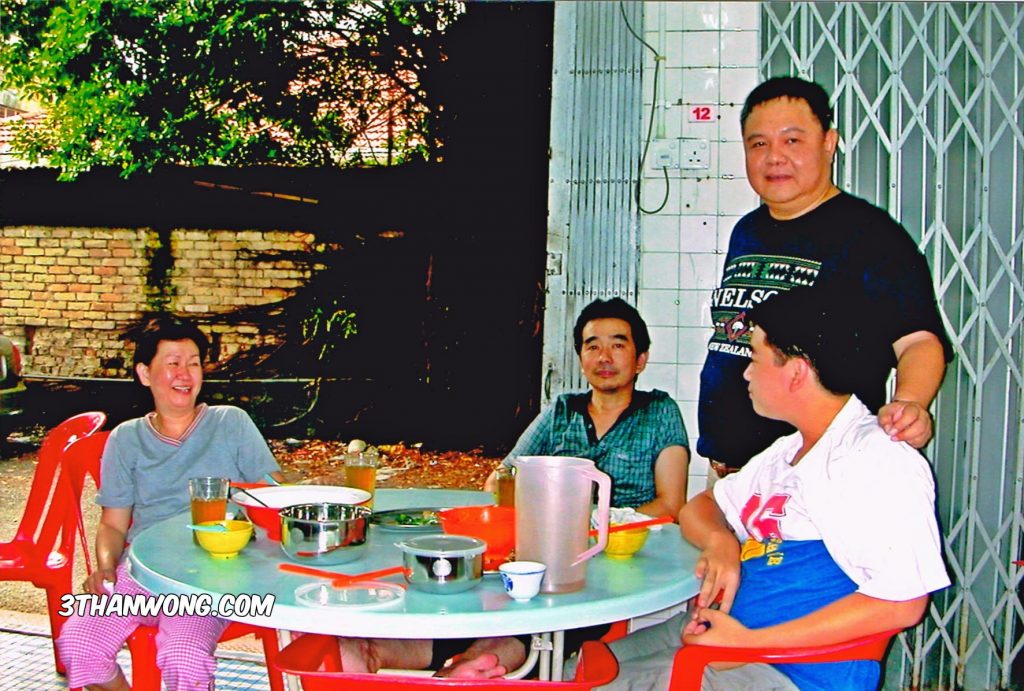 There was another group of Singaporeans who used to come in pairs and more interestingly, in their superb cars of about 6 – 7 cars in total – Lamborghini, Ferrari, and Porsche, taking up the entire stretch of parking spaces in front of our shop. Usually at about 11 am, they would call my mother, “Hi lady-boss, we have just crossed the Malaysia-Singapore border, now at Johor Bahru. We should arrive at your restaurant around 2 pm”. 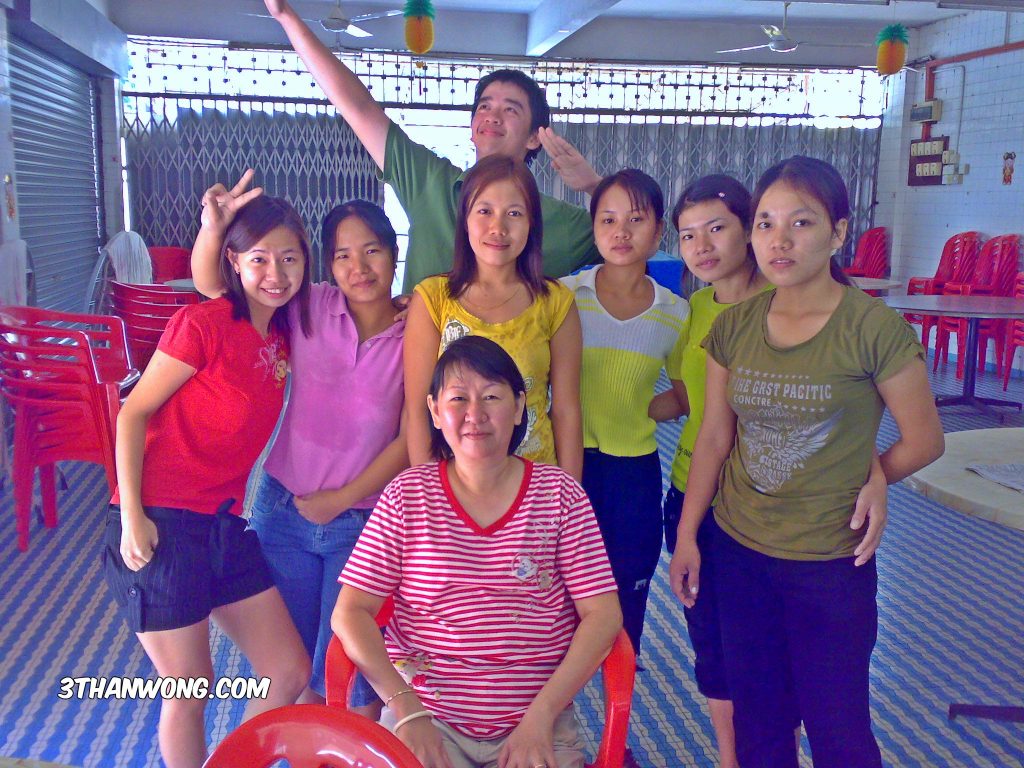 Seated my mother, on the left my dear sister with our staff and me in green at the back. (Didn’t know that I dabbed way before dabbing was a trend)

A few years later, the shop next door was for sell and Chef Keong brought it. Rather than paying the rental, paying off bank loans is much more worth it. It took about 1 year to renovate the shop. At around 2010 – 2011, we finally moved to our newly renovated restaurant. Better services from the open kitchen and ceiling fan to a closed kitchen and air-conditioned. Separating the kitchen removes the smoke coming from the wok, providing an improved service to our customer.

The entrance of air-conditioned Keong Kee Restaurant. It was here my mother came up with the name 强记面食 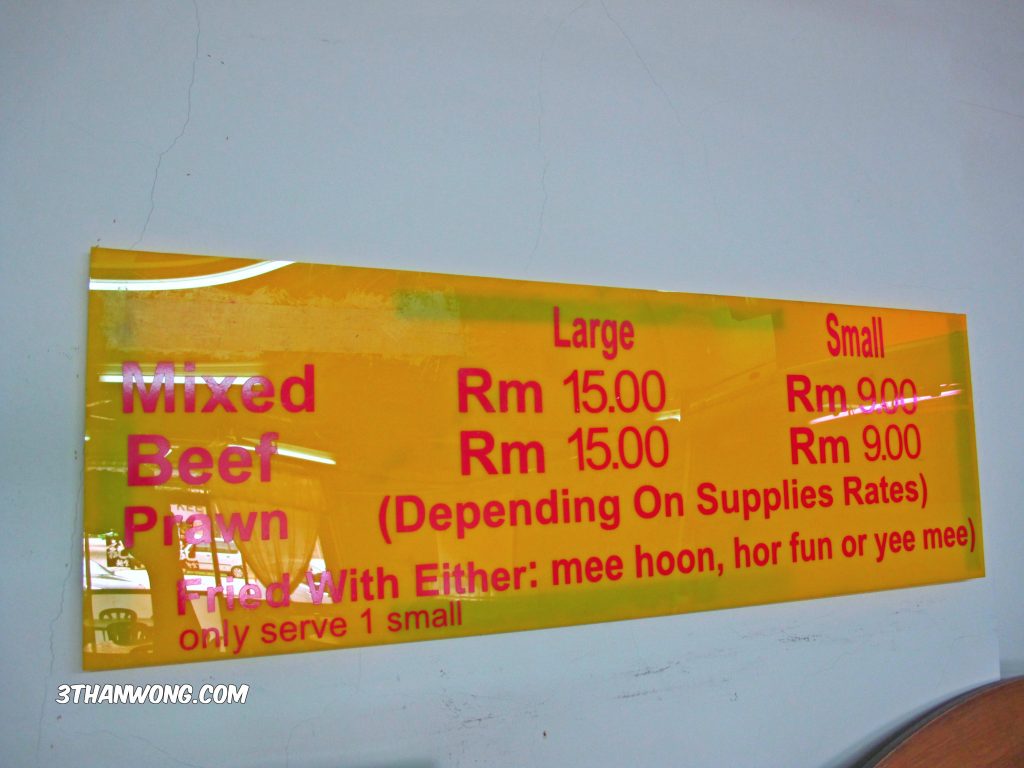 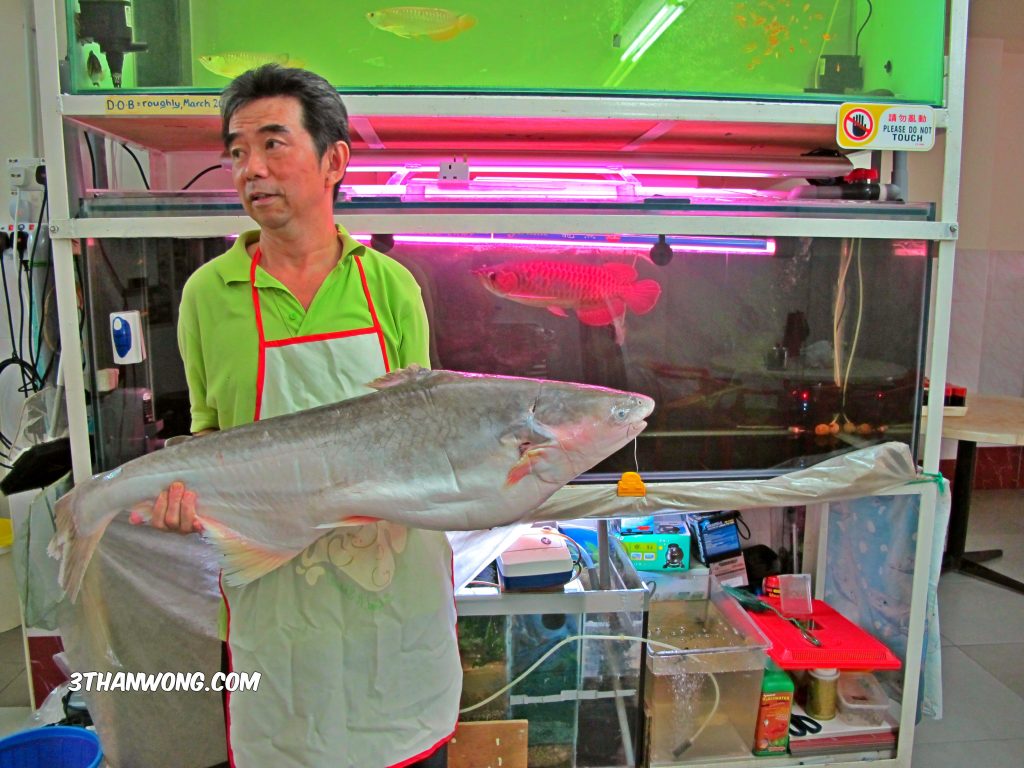 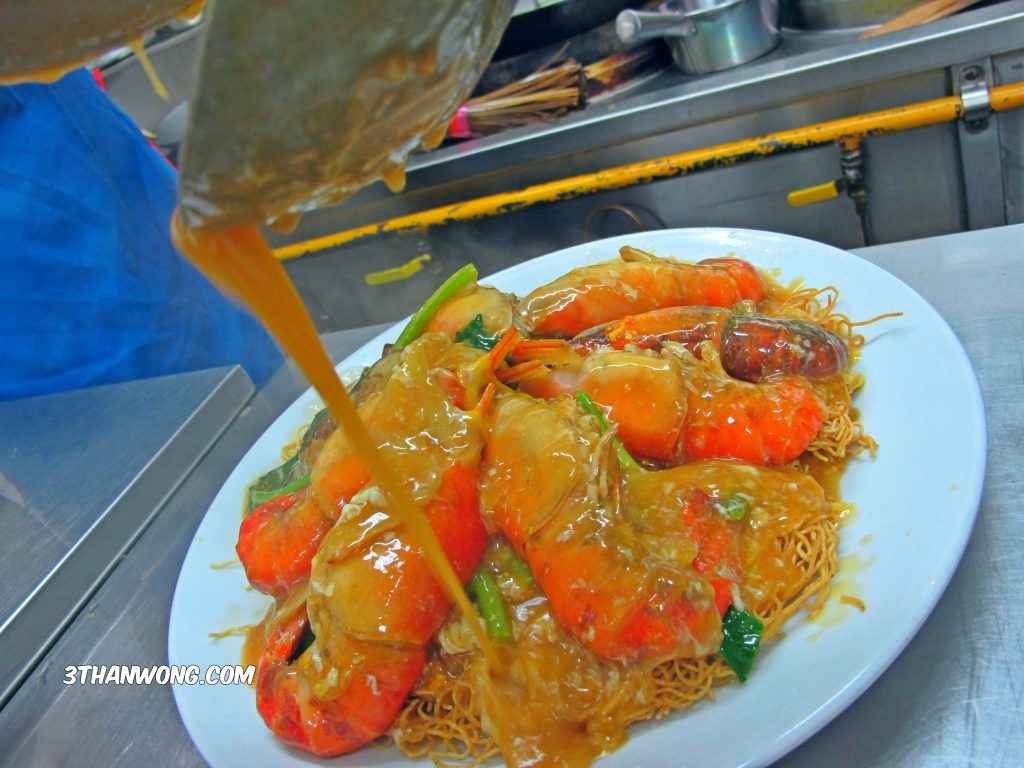 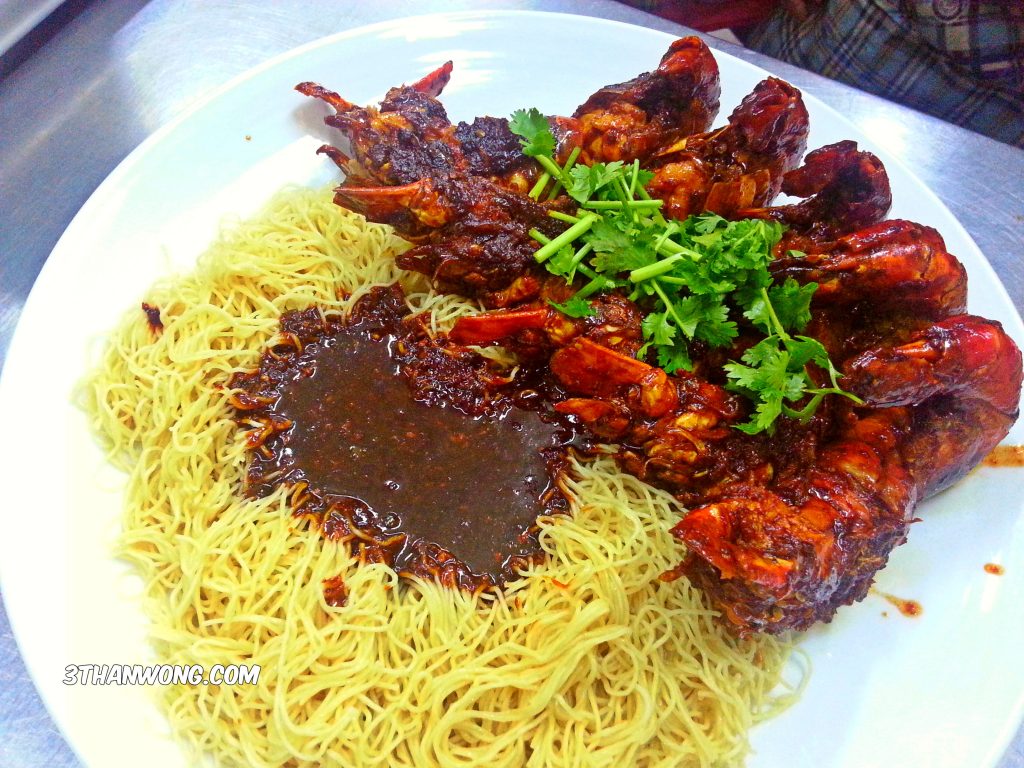 The spicy version of the freshwater prawn noodle – Harluk Mee

Here he continues to improve his culinary skills and getting more requests from customers to cook per-reservation dishes.

These are some of the pre-reservation dishes that Chef Keong produces to served his regular customers. Some of them have been his loyal customer since the 1980s, watching all his children growing and witnessing his legacy. From a customer to a friend, many have become. 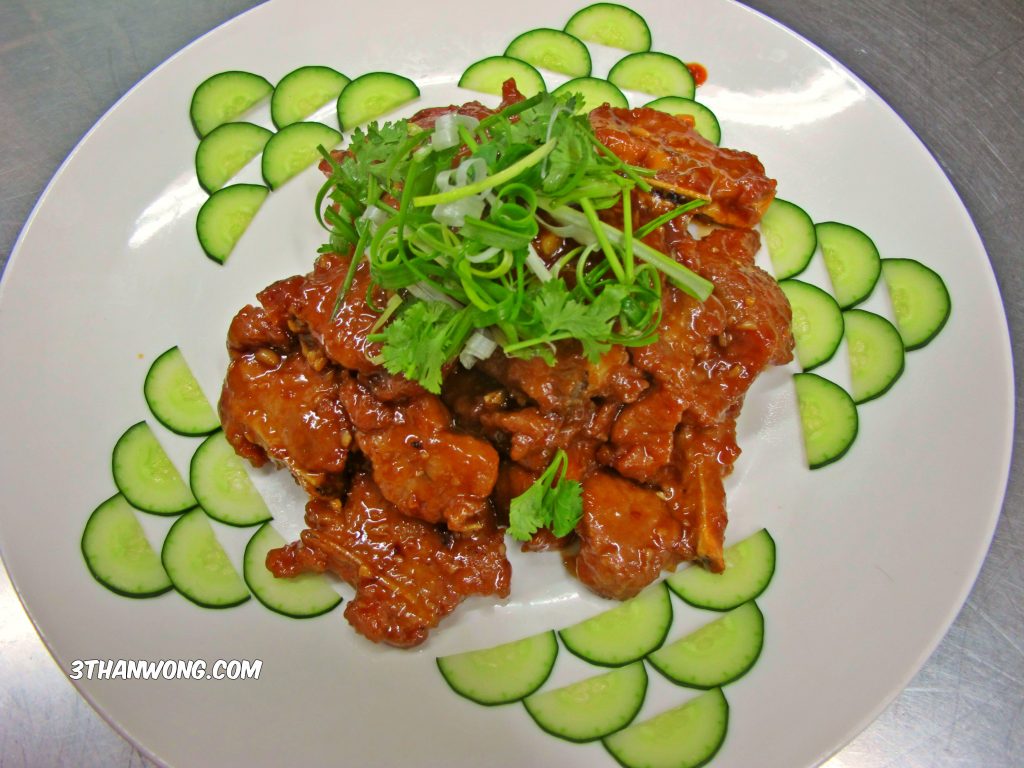 Pork ribs glazed with a sweet and tangy sauce 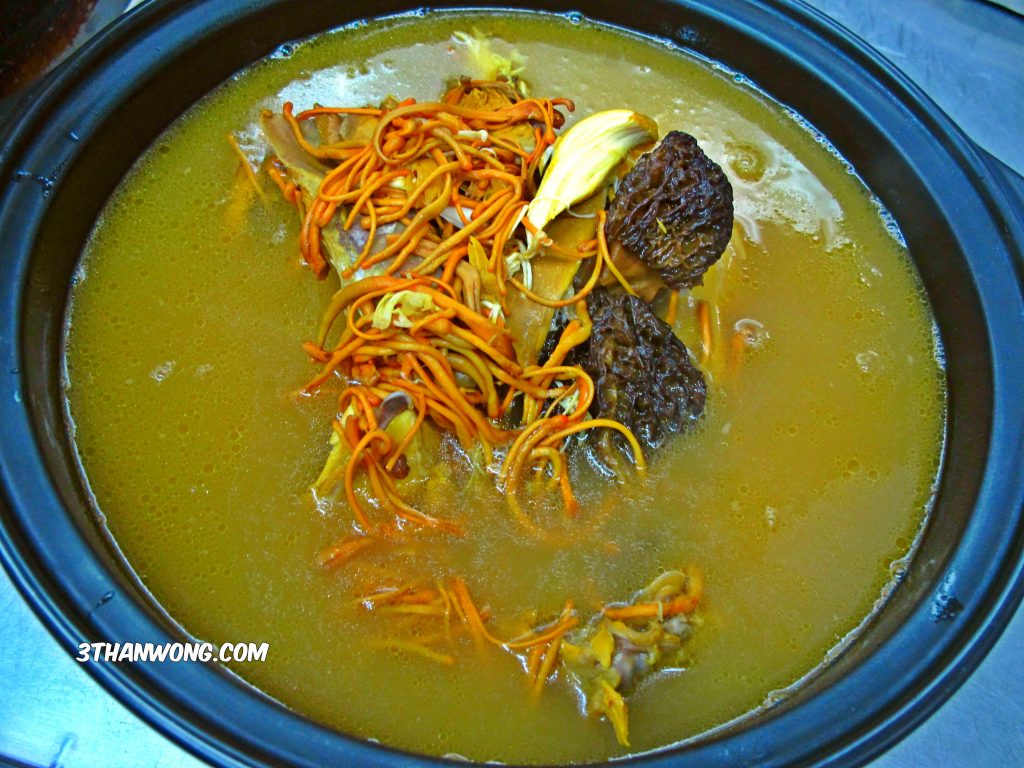 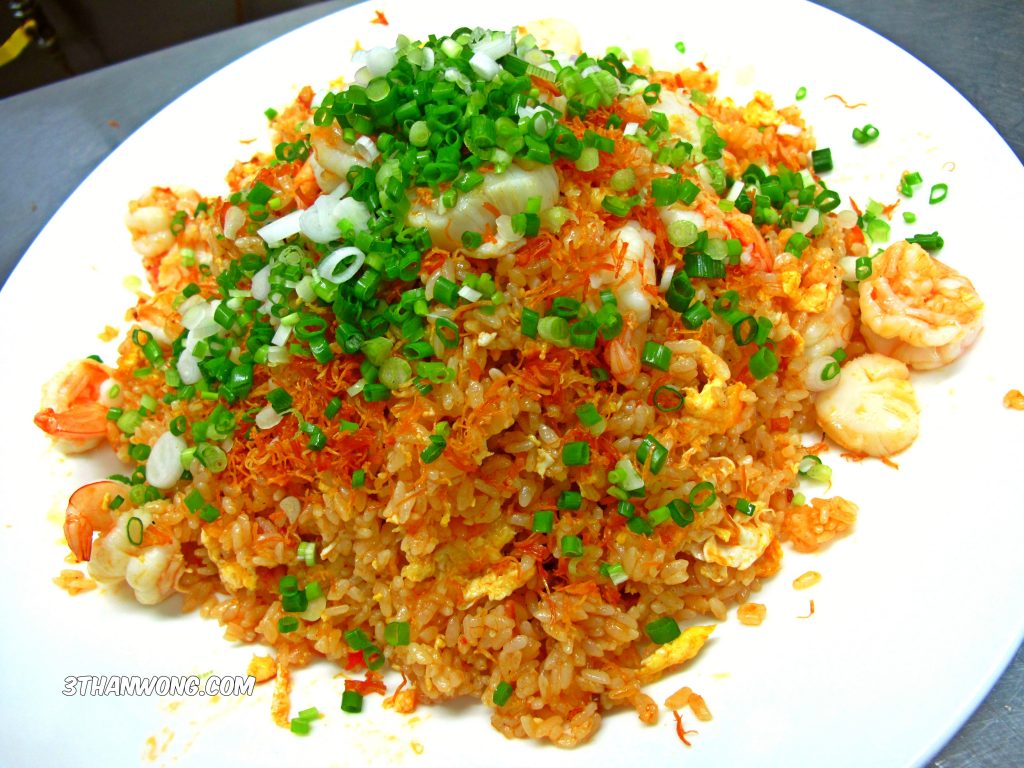 Empurau Fish – it was fetching a price of RM500/kg 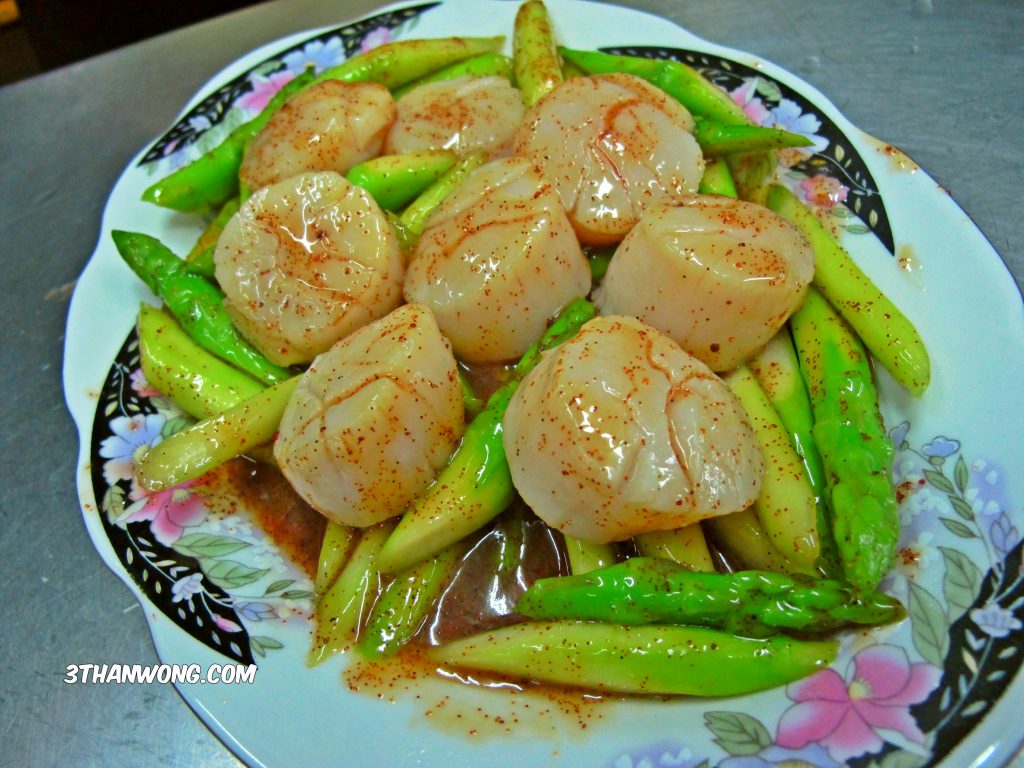 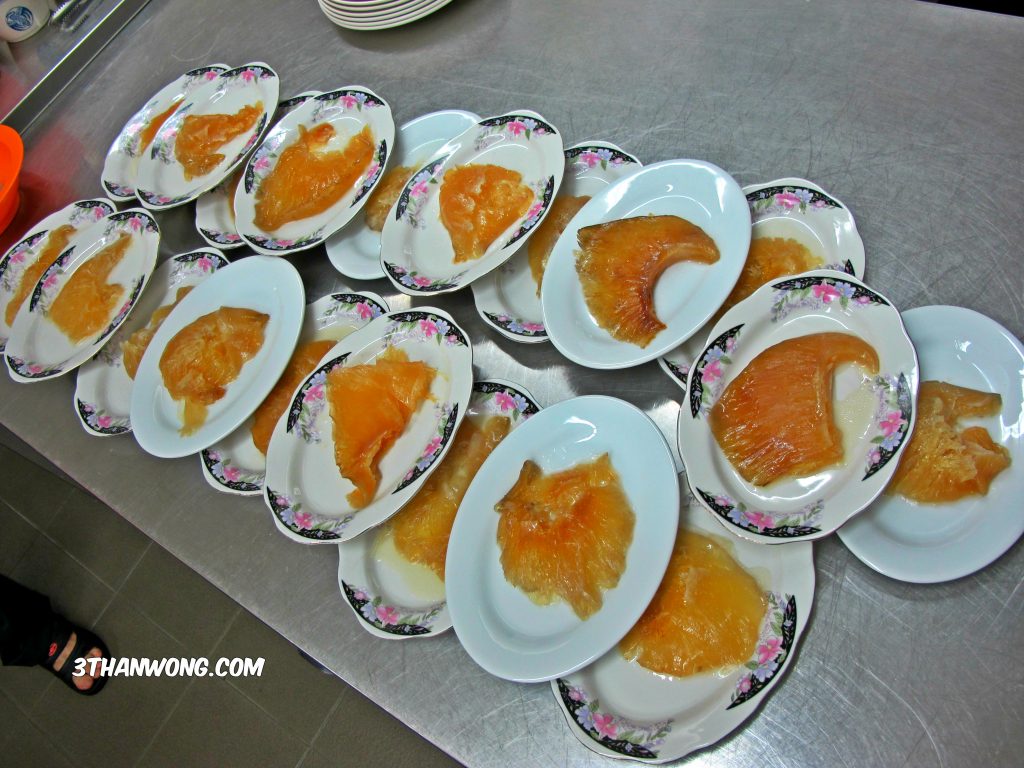 Steamed Shark fin ready to be served with sauces 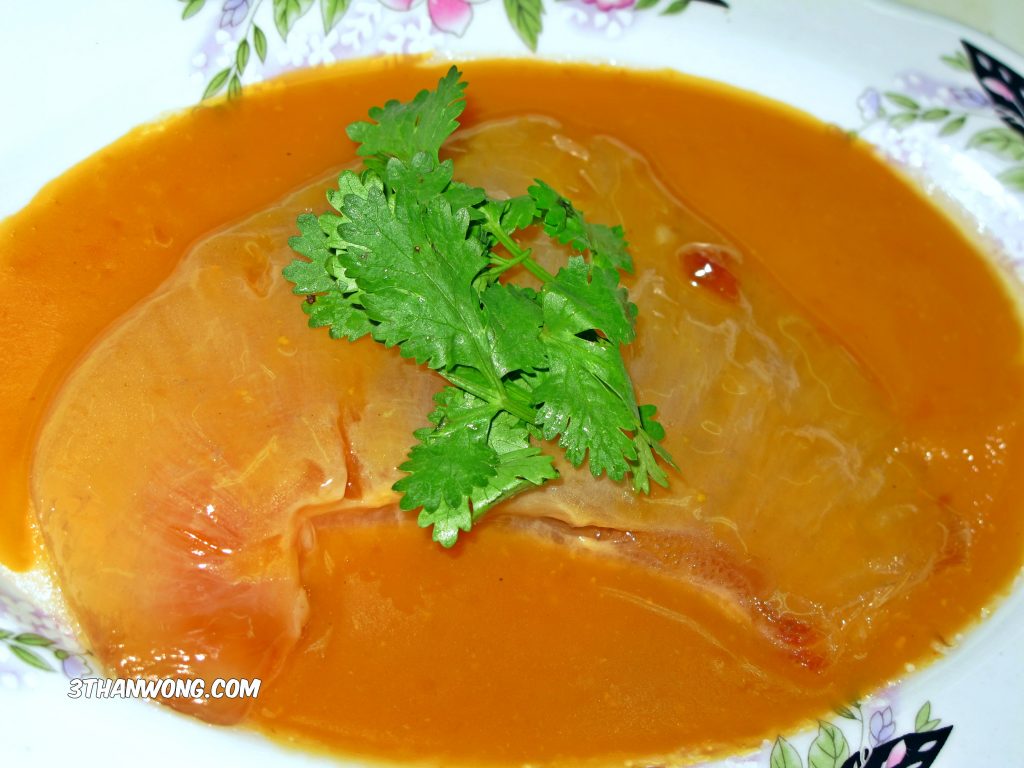 With his dear wife’s condition deteriorates, Chef Keong decided to retire from the culinary industry with the last business day on 2014 January 28th. Chef Keong dear wife passed away after battling cancer for a decade on 2015 September 29th.

Today, in the year of 2017, as a retiree he spends most of his time at home looking after his grandchildren. He still does have a habit of waking up in the wee hours, driving through the morning traffic to meet his friends at some coffee shop around the Pudu area for a glass of local hot coffee and breakfast.

Even today, sometimes we still do receive some phone calls from our customers looking to make a table reservation only to have them disappointed. There is still a request from friends (customer turned friends) asking Chef Keong to serve again as they dearly miss his cooking. Chef Keong says that if I want to let it go, I will let all of it go.

In loving memories of Mdm. Leong May Leng