Attaining the pinnacle of success is a dream to many. However, Rome wasn’t built in a day. It is extremely inspiring as we look into all the individual fascinating stories of the top 10 best chefs in the world. These chefs are all masterclass and truly passionate in the culinary field. (Also check out the richest chef in the world)

The noble vegetarian chef, was born in 1956 at La Guerche-de-Bretagne, France. He was perfected at Le Lion d’Or in Liffré from 1971 to 1975 under the Michelin-starred Breton Chef Michel Kéréver – fundamentals in classic cuisine. He then entered La Chaumière under triple Michelin Star-holder Gaston Boyer, a culinary classicist. Before owning his very own three-star restaurant, he joined as a member of a small kitchen team at L’Archestrate, led by Alain Senderens. He started his career at Duc d’Enghien, where he perfected his carpaccio of langoustines with caviar, receiving two Michelin stars at the age of 26, and another two at Carlton of Brussels.

In 1986, he opened his own L’Arpège which were given three Michelin stars in 1987, 1988 and 1996. Since 2001, Passard revolutionized the cuisine world by shifting from red meats to vegetables. He was once the divine of tender slow-cooked meats, but now the ambassador of vegetarian cuisine, feeling that he had learned everything he could from meat. He also patented “Bouquet de roses” apple tart, which honors the flower and the fruit. As the son of a musician, he also plays the saxophone. This visionary chef undeniably is the top best chef in the world.

He holds eight Michelin Stars, the most Michelin Stars more than any other Spanish chef. He is also the one and only chef owning two 3-star restaurants in Spain, one in the Basque Country (2002) and the other one in Barcelona (2017).

He started learning cooking when he was 14 at his parent’s owned restaurant, Bodegón Alejandro. Later he travels to France to get himself trained as a pastry chef at the age of 17. While most of us spend most of our time hovering around or pursuing a college degree, he took over his parent’s restaurant at the age of 20. He earned his very first Michelin Stars at the age of 25. 8 years later, he opened his eponymous restaurant in Lasarte-Oria, which was awarded three Michelin stars and ranked 29th of the best restaurant in the world by Restaurant in 2008 and 2011. Three characteristics for Berasategui to achieve perfection are excellent food products, artisanal techniques, and on top of that, hard work.

A French gastronomy and the most respective and imaginative chef and I would add, the emotional chef, opening the field of emotions through his food. He is the owner of the eponymous Pierre Gagnaire restaurant at 6 rue Balzac in Paris and won the Best Chef in the World award in 2015. On top of that, his restaurant was ranked in the S.Pellegrino World’s 50 Best Restaurants by industry magazine Restaurant, ranked number 3 for three consecutive years during 2006, 2007, and 2008.

After 5 years of being the head chef in his family’s restaurant, Le Clos Fleury in St Etienne, he opened his own restaurant which gained two Michelin stars in 1986 and the third in 1993. Undeterred by the closing of his restaurant due to financial challenges, his spirit drives him to regain the three Michelin stars at his new restaurant in just 2 years. He now has part ownership of Sketch in London and even a small empire of restaurants in Tokyo, Dubai, Seoul, Hong Kong, Moscow, and Las Vegas.

He is the oldest among the top 10 on the list, who truly is a legendary chef. As a French, he differentiates himself by being known as a creative chef through associating fresh herbs and edible flowers in his cooking. His eponymous restaurant in Laguiole, France is in operation since 1992, where he earned three Michelin stars and also appeared in the World’s 50 Best lists regularly.

Besides being the founder of the recipe Le biscuit de Chocolate Coulant, he is also the precursor of vegetable-centric cuisine in France. An interesting fact about Bras is that he remains true in his act of cooking as well as in person, where most of the time addressed by Michel rather than chef from his collaborators. Hence, as a cook, he is a merchant of happiness for everyone.

The one and only Asian made into the top 10 chef list of the world was born in 1970. He holds three Michelin Stars at his restaurant Nihonryori RyuGin. He stepped into the kitchen as early as at the age of 11, cooked, and impressed his mom. After graduating from culinary school, he spent 11 years working at Aoyogi, under the Master Chef Hirohisa Koyama, equipped with the art of kaiseki. He started to gain his fame when he prevented rigor mortis from setting into a fish using a wire, with his peers describing him as one of the most important chefs in Japan.

Yamamoto opened his own restaurant Nihinyrori Ryugin in Roppongi, Tokyo at the age of 33. Then he has his branches, Tenku Ryugin (Hong Kong) and Shoun Ryugin (Taipei, Taiwan) in 2012 and 2014 respectively. His ingenuity of merging the tradition of kaiseki with molecular gastronomy results in the excellence of taste that is internationally acclaimed.

A French Chef who’s awarded three Michelin-Star as well as the unique and prestigious title of Meilleurs Ouvriers de France (MOF-a true honor upon receiving recognition as the top chef in France). Looking back, it was a curious coincidence for him to be who he is today, started with the desire of having a bike at the age of 13. His dad simply told him to find a job where he ended up in the restaurant and fell in love with the kitchens, the rigor, and the atmosphere. This continues to pave his path as he went to a catering school at Rouen when he was 15 and then did his apprenticeship in Le Grande Cascade, Paris. Later on, he was trained under the distinguished chef: Emile Tabourdiau at the Hotel Le Bristol, Paris, and Claude Deligne at the Taillevent.

A remarkable point of his chef life is him receiving the proposal to become the chef of the kitchens of the Hotel Le Bristol, Paris at the age of 36. He won the second Michelin-Star for the gourmet restaurant after two years of hard work. At the age of 46, he received the 3rd Michelin star he dreamed of and is elected “Chef of the Year” by Le Chef magazine. A year later, he opened his own 2nd restaurant, Mini Palais where his very 1st one, La Verrière d’Eric Frechon was critically acclaimed. Three years later, He opened Lazare, a new step in his desire to offer quality yet affordable cuisine. Being a defender of French classics and always striving to achieve French excellence, he truly is the master of memorable fine-dining experiences.

A Dutch Michelin-Star winning chef who was born on January 9, 1965, into a family who owned a café. After working in a few places upon completion of a private chef course in Groningen, he started as a trainee chef in De Librije and became the head chef after a year. In 1993, Jonnie and his wife, Thérèse bought over the restaurant and received their 1st Michelin star shortly after this. He was also given the title SVH master chef, which is the highest culinary honor in the Netherlands in 1997. Following this, with the 2nd Michelin star in 1999, he was made outstanding being the youngest two-star chef in the Netherlands. It continues to shine with the 3rd Michelin star in 2004, making it the second three-star restaurant in the Netherlands. Their success story doesn’t stop there, as the 1st Michelin star landed on their Librije’s Zusje (Little Sister) restaurant in November 2008 (just six months after their opening) and the second in November 2011.

His cooking is much attached to his love for regional products. The mutual passion with his wife of making everyday routine into a special experience for everyone adds the flavor to their presentation of wine and food with much love and affection. He pours his heart into what he is cooking to make it altogether unique and extraordinary.

Copenhagen’s top chef, Denmark’s God of Food, and also one of the world’s most influential and inspiring chefs. After his culinary course and training, the twisting point of his chef journey is at the age of 25 when he was contacted by Danish chef Claus Meyer to be the chief position of what later became Noma. It takes some time for the world to accept and welcome the new concept of Nordic food with its own DNA. Nevertheless, Noma became one of the most talked-about in the global gastronomy, having two Michelin stars, 3 consecutive years of top 50 in Restaurant magazine, and 4 years of Best Restaurant in the World.

According to Redzepi, besides having a good mood to cook, adding music to the kitchen makes a dramatic change to the food, as well as away from the “steel cage” conventional kitchen. What makes him distinctive is he only uses what’s locally available in season. It is in the scarcity of winter that he came out with one of his iconic dishes called dried scallops and beechnuts. 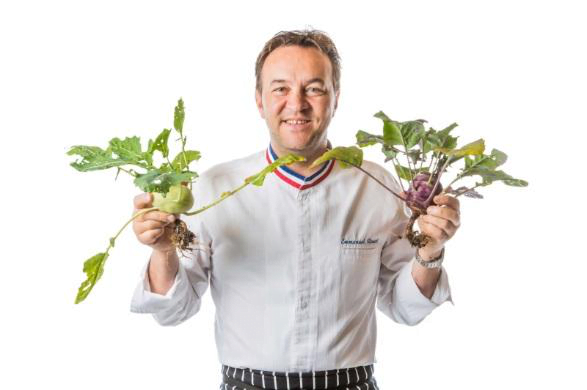 Another français chef who holds the titles of Meilleur Ouvrier de France (MOF) as well as Compagnon du Tour de France. He was trained under the tutelage of Christian Constant, Eric Fréchon, Marc Veyrat, and Yves Thuriès. Subsequently, he moved back to the mountains and set up in Megève. In 1998, he founded Flocons de Sel (“Flakes of Salt”) within a hotel offering spectacular views over the mountains at the heights of Megève. The restaurant won its three Michelin stars in 2003, 2006, and 2012. Also in 2012, he is entitled “Cooking Chef of the Year.”

He goes into the mountains, visiting the farms and pastures, meeting the suppliers in-person to select his product in its purest form and present their very best quality with his magical touch of creativity. Generous, lively, colorful, appealing, and modern are just some words to describe this mountainous chef’s cuisine.

Joan Roca i Fontané, a Spanish chef who has culinary aplomb in his blood, being born in a family of three generations restaurateur. Despite getting a certificate from the academy course, he is now one of the best chefs with a family-owned restaurant, El Celler de Can Roca, with his two brothers (Josep the brilliant sommelier and Jordi the creative patissier). They embark as a neighborhood restaurant before everything exploded upon receiving three Michelin stars in 1995, 2002, and 2009. In 2009 itself, it was ranked 5th in the World’s 50 best restaurants and then 4th place in 2010. It climbed to the second in 2011 and 2012. 2013 is an exciting and unforgettable moment where it was enthroned in the 1st place.

Influenced by his family on Catalonian cuisine, Roca takes the challenge of changing it to a new face by harmonizing traditional flavors with avant-garde techniques. A dish that brought him to fame was warm cod with spinach, cream of Idiazabal cheese, pine nuts, and a reduction of Pedro Ximénez. Among the words to best describe Roca were warmth, family, and humility.